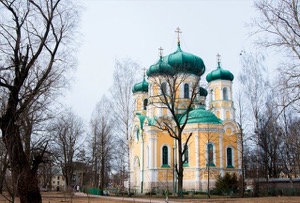 Ivan Volodya Nikonov was poor. Not that glaring poverty that melts the hearts of old ladies, but really poor. A filthy, repulsive and unjust poverty that turns the stomach.

The most important possession of these people is their two hands, which they cherish and protect with all their strength. When one becomes as destitute as Nikonov was at that time, one understands the true value of fingers, palm or nails. You don’t care about his long black beard, his dirty and greasy hair, his soiled clothes, the holes in his shoes, as long as his hands are in perfect condition.

Walking on the outskirts of Perspective N***, Nikonov could not ignore the awful indifference of people towards him.

This woman in front of a lace store had to wait for her lover as she compulsively looked at her butterfly buckle watch. She was proudly and ostentatiously wearing a white gold necklace, finished with a pearly medallion.

This man, with grey sideburns, was crossing the main avenue at a brisk pace, his shiny, streakless shoes suggesting that he had just bought them. His streamlined pants did not match his oversized frock coat, but his loops provided him with a pretty leather belt with a buckle closure.

The nuns, full of themselves, signed themselves in praise, and held a Bible with morocco bindings and gold ornaments. Their black cassocks, with no frayed lines, dragged in the dust of the slabs. The cross around their necks was made of wood.

Nikonov entered a confectionery store, taking advantage of the merchant’s inattention, and begged the ugly fat customer for a few pennies. The customer was startled, put her hand to her mouth and shouted. The merchant looked up and saw him.

“Shoo! Don’t stay in my store! Don’t bother my customers! »

He went up the Perspective N*** to the river, his stomach was crying out for food.

We can say without being mistaken, at this moment of his life, Ivan Volodia Nikonov was poor.